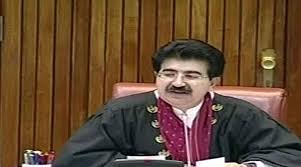 ISLAMABAD: The Senate Chairman Muhammad Sadiq Sanjrani said Wednesday that the journalists of Baluchistan were working in difficult conditions and hence they deserve maximum patronage.

This he observed during a meeting with a delegation of journalists of Baluchistan Press Club, who called on him here. He said he would consult with relevant stakeholders on other measures, including legislation for the welfare and protection of journalists.

The Senate chairman said the services of journalists for the country and the nation will always be remembered. He said the media is an important pillar of the state and media workers perform their duties with their lives in their hands.