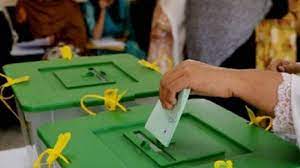 A high-level meeting of the AJK EC held in the State metropolitan, gave final touches to the code of conduct for media in connection with coverage of holding of the general elections of Azad Kashmir, it was officially stated

Senior member of the Azad Jammu and Kashmir Election Commission chaired the meeting which finalized the code of conduct for print, electronic and social media.

According to the media policy inked in the meeting, the media persons belonging to print, electronic and social media will desist from giving any comments on the basis of unconfirmed reports.

The entry pass for media coverage will be issued according to the list of media persons provided by the Secretary Information. Direct access in the control room by the print, electronic and media groups will not be allowed. Only 10 to 15 journalists will be allowed for press coverage for polling stations in every district.

However, permission for this coverage will be granted on the recommendations of the Secretary Information.

According to the code of conduct, making video footage during counting of votes will not be allowed. However, footage will be allowed outside the polling stations and booths.