ISLAMABAD: Detained supermodel Ayyan Ali, on Monday, alleged that she is facing discriminatory treatment during her trial in the currency smuggling case she is facing. She claimed that while others facing similar charges are released on bail she has been behind bars for months.

The supermodel has been in jail since March 14 when she was caught at Islamabad airport attempting to board a flight to Dubai with half a million dollars.

This is the first time since her arrest that the supermodel broke her silence and directly addressed the court.

Ms Ali pointed out that the other accused caught carrying double or triple the amount in their bags were released on bail after a couple of weeks but her request for bail was being denied. She also alleged that neither the Federal Board of Revenue nor any other institution had sought details of tax and property from other people accused in similar cases but in her case, each and every detail of her income and assets was under scrutiny.

The supermodel addresses court for first time since her arrest
She told the court that her modelling career was at stake because of her prolonged detention. She said that she had signed a number of contracts with various advertisers and she was unable to fulfill her obligations.

Ms Ali also complained about the negative media attention surrounding her trial. She said that since her arrest in March, she is being negatively projected on media, in particular social media. Rejecting allegations of having links with political personalities, Ayyan claimed: “I have no connection with any political leader.”

She requested the court to issue directives to media outlets not to politicise the legal proceedings.

“I will take legal action against those who have started vicious campaign against me,” she warned.

“I am a citizen of this country and I have certain rights but it appears that my constitutional rights have been taken away,” she said.

Reacting on the rejection of her bail petitions, the supermodel said that in case she is granted bail, she would not leave the country.

“I will not go abroad even if I get bail,” she assured the court.

Her counsel Sardar Latif Khan Khosa said that on social media, numerous people were accusing Ms Ali of having links with politicians and businessmen. He also filed an application before the court requesting that the media be restrained from engaging in propaganda against the supermodel.

The special judge of the customs, excise and taxation court adjourned further proceedings in the currency smuggling case until July 13.

The court also took up an application filed by the Federal Board of Revenue (FBR) seeking registration of a case against Ayyan under Anti-Money Laundering Act. The proceedings on the said application were also put off till July 11. 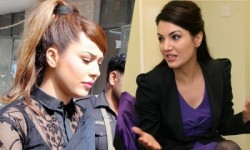