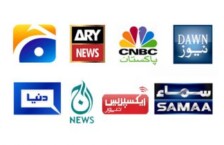 A press note issued by the electronic media regulator says, “Pemra has strictly warned cable network operators to refrain from any activity that is against Pemra laws and the terms & conditions of their licenses.”

The action comes amid public complaints that various cable operators are still airing illegal TV channels or are playing vulgar content on their in-house CD channels, but the regulator’s primary concern is the blacking out of certain private TV channels and the frequent changes in their position on cable networks.

Since 2010, Pemra policy dictates that all the channels have to be placed in the relevant cluster, but the authority has not yet been able to successfully implement this rule in this time.

The Pemra policy refers to a ‘bouquet placement’ of channels, which means that all news channels, sports channels and entertainment channels should be placed close to each other.

“The idea was to minimise misuse of personal discretion by the cable operators to place or change the position of any channel at will,” a Pemra official said.

Even viewers are fed up with the constant shifting around of channels. A number of people Dawn spoke to said they had complained to their cable operators about the arbitrary reshuffling of channels, but to no avail. Cable operators defend their actions by saying that they have to abide by the decisions of the cable operators’ association. Even though Pemra is empowered to regulate cable operators, they have not been very effective and the Cable Operators Association of Pakistan seems to be calling all the shots.

Pemra’s role, of late, has mostly been limited to issuing directives or warnings – not only to cable operators but also TV channels, which who have violated the regulator’s rules.

The most recent controversy arose in the wake of the standoff between Geo TV and the ISI, which not only exposed the politicised nature of the authority but also its inherent structural weakness.

While some cable operators continue to defy the directives of Pemra and are refusing to air Geo news, the authority is unable to take any punitive action against such violators.

A Pemra official told Dawn the authority has been fining cable operators and nearly Rs2 million in fines have been handed out so far.

“But the main problem is that the channels and even the cables operators move the courts and obtain stay orders against any decision by the authority,” the official said adding that there were around 400 stay orders against various of Pemra decisions.

“These decisions include the suspension of cable operators’ and TV channels’ licenses and even over the content of certain TV programmes,” the official said, adding, “The most serious issue faced by Pemra recently was over obscenity”.

The official said that the Supreme Court had taken suo motu over what it called ‘obscenity in certain programmes’, but at the same time, the lower courts had issued stay orders against a Pemra decision to stop the airing of such programmes.

“While the management of those TV channels taunt us by touting stay orders –employees of the same media group are seen requesting the apex court to ask Pemra to define ‘obscenity’ in the light of the Holy Quran and the Sunnah of the Holy Prophet (pbuh),” the official added.

Observers feel Pemra’s poor implementation record also has to do with its weak management structure. The authority has not had a full-time chairman for over than six months now. Chaudhry Rasheed was appointed became chairman in July 2013, but soon after, cases were opened against him by the Federal Investigation Authority, keeping him otherwise occupied in various courts of law. His appointment was de-notified by the government in December 2013. Currently, Pemra is functioning with Pervez Rathore as its acting chairman.