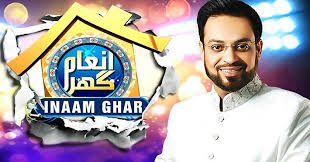 ARACHI: History is about to be made in the electronic media. Auditions for ‘Inam Ghar’, the biggest family game show in the history of Asia on Geo TV, are underway.

Hosted by internationally renowned broadcaster, Dr Aamir Liaquat Husain, thousands of people are vying for a place on the quiz show which offers Rs40 million, including a furnished apartment worth Rs10 million, to the winners.

In order to get a place on the show, the aspirants have to appear in a written test and then they will have their intelligence and confidence test before Dr Aamir Liaquat Husain.

In this regard, the first show of ‘Inam Ghar’ based on the first step of the auditions, namely, the written test, was telecast on Geo TV at 7.00 last night while the successful candidates of the first step will face Dr Aamir Liaquat Husain in the second step. How will the successful candidates fare before the most popular research scholar? To find out you will have to wait until the next round of the auditions which will be telecast at 7.00 tonight.

At the advent of the New Year, the successful candidates will become part of ‘Inam Ghar’ and respond to the questions to be asked by Dr Aamir Liaquat Husain for winning motorcycles, diamonds, Haj package, return tickets for overseas trips, jewellery, cash, prized electronic items and a furnished apartment worth Rs10 million. There will be some more prizes to be won out of the total package of prizes worth Rs40 million. Besides, there will be some other prizes which have never been given in any other show ever.

In the first phase of the auditions, thousands of people appeared in the written test from all over the country yesterday. Long queues of aspirants were seen outside a private hotel, where the aspirants were welcomed by well-known television artist and anchor, Muzna Ibrahim, along with Azhar Ali. The two also hosted the preliminary round.

On the occasion, some young enthusiasts raised slogans in favour of Geo and Dr Aamir Liaquat Husain.

During the show, Shahryar Tariq sang the official ‘Inam Ghar’ song while Azhar Ali, in a parody of a policeman, brought laughter to the audience.

The platform of ‘Inam Ghar’ is the only platform that is going to be offering every Pakistani a chance to make a fortune by winning highly prized gifts as well as the commendation of their compatriots by displaying their talents.

People expressed their immeasurable delight as soon as the promo for the auditions for the ‘Inam Ghar’ was telecast on Geo TV. They are eagerly waiting to see the phases of Inam Ghar’s auditions as well.