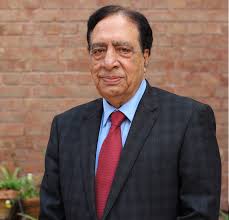 LAHORE: The federal government has appointed writer, poet and columnist Ataul Haq Qasmi the chairman of the PTV. A notification in this regard will be issued today.

Qasmi has already served as ambassador to Norway and Thailand. He has been working for the PTV for 35 years as a playwright. His classical dramas include Khawaja And Sons, Shab Daig and Sheeda Tali.

He has been affiliated to journalism for 52 years. His travelogues Shauq-e-Aawargi and Goron Kai Dais Main are very popular. His books include Column Tamam, Sargoshian, Hansana Rona Mana Hai and Mazeed Ganjai Farishtai. He has been honoured with Sitara-e-Imtiaz and Pride of Performance.

Till his new appointment, he was serving the Lahore Arts Council as its chairman. Under his guidance, international literary conferences were continuously organised for six years, which were attended by poets and writers from all over the world. Showbiz and literary circles have welcomed his appointment to the PTV.
The News