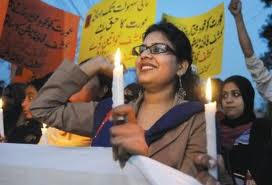 Karachi: Stressing the need for the economic and social empowerment of women in the country, Sharmila Faruqui, media adviser to the Sindh chief minister, said that it was highly admirable that women were standing up for themselves and making achievements in every field despite the men being reluctant to give them their due.

She was speaking as chief guest at an art exhibition exclusively featuring works of women artists on the eve of the International Women’s Day falling on Friday (today), at the Alliance Francais, Karachi, Thursday evening.

“Every day is a day where the beauty and courage of the women should be celebrated”, she said. Earlier, she cut the ribbon to inaugurate the exhibition.

The exhibition, which runs up until March 9 (Saturday), has 48 exhibits on display. The show includes works by senior women artists of Pakistan as well as those by young upcoming ones, both from Karachi and the rest of the country. Notable among these is Zara David from Lahore. Others, mainly from Karachi, included Naheed Raza, Riffat Alvi, Romilla Kareem, Marium Khan, and a host of others. The innovative works displayed at the show captured the varying moods and situations of women. They managed various moods and situations of women to life. Each work displayed originality and creativity.

For one, there was a mural titled, “The enchanted forest” by a young artist Cyra Ali. At first glance the figures resemble floral patterns but on delving deeper, it turns out that they are the grimacing faces of women, grimacing in reaction to the infamy and indignities heaped on them by men. Obviously this calls for an overly fertile imagination to gauge the theme of the work.

Then there are two paintings of curvaceous young women, in virtual see-through attires, female form at its most tantalizing, by Hajra Mansur. However, despite their meticulously chiseled features, one can detect a feeling of despondency in their eyes, despondency that comes from being exploited.

Then there are two works in mixed medium on Wasli paper by Romilla Kareem. They depict a garden and two birds. Both are titled, “The promised garden”. As Kareem says, “I, as a woman and a mother, have a natural duty to groom my children and see to it that they develop wholesome thought processes. Rather than taking them to a fast food joint as entertainment, I would rather train them to love nature and concentrate on the heavenly garden and the hereafter. I would rather have them sit in the garden and see the birds sing on the trees, and appreciate nature”. The two main sponsors of the exhibition are New World Concepts and Grandeur Art Gallery.