Art and the inevitable

THE roof is leaking in Frere Hall. Ordinarily, this would not be a cause for concern. Pakistan in its current moment of unrest is a nation deluged by far more than a trickle of water, poised as it is at the cusp of many a destruction.

Neglect and public ownership are long-time friends here. Frere Hall belongs to everyone, and so it belongs to no one. This Italian Venetian building, commissioned in commemoration of a long-ago colonial commissioner, has shown its ornate façade to many generations of Karachi’s dwellers. These days, when bullet-ridden nights fall in Karachi, a giant floodlight illuminates its façade with a Pakistani flag, the past bathed in the colours of the present.

Those are the politics and promises of the outside. A more poignant tragedy lies within, for it is the ceiling of Frere Hall that one renowned painter chose as the venue for his creation. Arz-o-Samawat (heaven and earth) was Sadequain’s last project; he died before he could complete it.

The painter meant the mural as a gift to the citizens of Karachi. In a public building, located in a park, the ordinary would have access to the exquisite, the original, and the transcendent. Anyone would be able to see it, and in directing the human gaze above, it could hope to invoke contemplation of a perspective not often considered.

The location, Frere Hall, had been the site of the artist’s first exhibition in the 1950s, and he selected it hence as the venue of a permanent creation. At the time, Frere Hall had fallen into neglect and disrepair, and this was the artist’s way of breathing life into a historic building. So entwined were his life and work that he lived in the building while he worked on the mural.

The first tragedy of the mural was that it was never completed. Sadequain’s death on Feb 10, 1987, ended that project prematurely. The coming darkness, one that would be far greater than what had been left incomplete, could perhaps then not be contemplated at that time. When Sadequain passed away, there were at least three galleries dedicated to his work. The one at Frere Hall was called the Galerie Sadequain.

The artist’s work, original, unnerving, and also Pakistani, was feted by the powers then. Pakistan, a young 40-year-old, had produced a great artist. The artist himself returned the homage; at his death, hundreds of his sketches, paintings and the immovable permanent murals were bequeathed to the country and to the city. The Karachi Municipal Corporation (KMC) became the inheritor of much of his work.

For several years, the Galerie Sadequain persisted. Reflecting the low priority given to art in a city rent apart by strife, little security or maintenance resources were provided to the paintings within. There were reports of thefts. When the KMC became defunct, along with it disappeared many of the paintings entrusted to it.

According to Salman Ahmed, who currently heads the Sadequain Foundation, even efforts by the late artist’s family have failed to reveal the whereabouts of many of his works. In many cases, they have been procured by private owners and emerge at international auctions where they are being put up for sale. What was left to the people of Pakistan can no longer be seen by them.

Murals are harder to whisk away and store and sell for personal profit. Perhaps Sadequain knew this when he invested his artistic energy, the last he had, in the construction of one. In it perhaps he hoped that he could invest some permanence into art, into the validity and value of its existence, into its accessibility to all. Murals are supposed to be forever; they cannot be squirreled away in warehouses, sold to secret others for illegal profits. As time passed, however, Pakistan proved this untrue. For the past several years, the mural on the ceiling of Frere Hall has been in a state of disrepair, the trickles from a leaking roof wreaking a slow death on the masterwork in the eaves. Again and again, offers have been made to the authorities in charge, to the governor of Sindh, to the administration of Frere Hall.

The members of the Sadequain Foundation, knowing the incredible waste this signifies, have tried to intervene, offered to conserve and restore free of cost. Their pleas have been resolutely ignored. The leaking roof bleeds onto the mural painted by an artist who loved Pakistan, and who died painting for Pakistan.

In the midst of mourning, the existing neglect and disrepair, some moments must also be reserved to consider the mayhem to come, whose signs and signals are everywhere today. The slow erasure of Sadequain’s legacy and a mural growing murky with moisture and neglect are apt metaphors for a country itself in thrall.

The murderous men with whom the country is contemplating peace are known to destroy that which provokes thought, a consideration of other worlds, a contemplation of unlikely beauty. The black and white Pakistan that is promised, replete with forbidding and abolishment, is unlikely to have room for art that instigates a breaking of boundaries. The question of the ceiling of Frere Hall, the last words and last lines of an artist, present just such a rebuke — the challenge of art before the seeming inevitability of ruin. 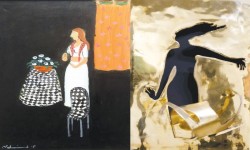 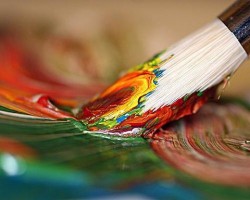