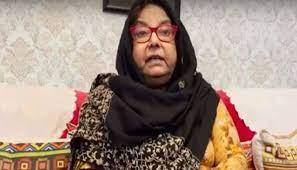 NAIROBI: Expressing disappointment in Pakistan’s justice system as well as the government, the bereaved mother of slain journalist Arshad Sharif has raised questions over her son’s torture before he was killed by Kenyan police in inexplicable circumstances.

In an interview with CNN International, Sharif’s aggrieved mother, Riffat Ara Alvi, said: “They tortured him.”

The interview did not specify who Sharif’s mother referred to as “they”, but she clearly mentioned that her son was subjected to bodily harm before he was put to death.

Both women said they did not expect justice to be done and appealed to the international journalist and human rights organisations to intervene.

The slain journalist’s mother told the TV: “I have no faith in the Pakistani government.”

Javeria said her husband told her he feared for his life and felt he would be killed.

“He (Sharif) said he is hiding somewhere because he is not feeling safe and they will assassinate him. He told me that clearly,” she said.

“I miss his voice, his presence. He was a great man. I lost a gem,” Sharif’s wife said and added,”It’s not possible to get justice in Pakistan and Kenya but I request all international journalist organisations and the United Nations to investigate this killing”.

Last week, a post-mortem examination of the slain journalist was handed over to his family and the Kenyan authorities.

Doctors at the Pakistan Institute of Medical Sciences (PIMS) discovered signs of torture on Sharif’s body during the autopsy, according to their report.

As per the autopsy report, dark black marks were visible around the wound on Arshad’s back. Four nails were missing from his right hand, while the right ankle also had marks of friction. There was no bone on the skull’s left side, while the brain’s left part was also affected. The journalist’s third rib was fractured and his left lung was also impacted.

The report also mentioned that there were blood clots in the nails of Arshad’s two fingers from his left hand. The bullet had affected the journalist’s brain and lungs. His left hand’s index finger also had a wound.

The sources at PIMS shared that they received the Kenyan post-mortem report after completing their own. The report which arrived from Kenya mentioned taking samples of Arshad’s blood and liver.

Sharif’s post-mortem report was handed over to his mother in Islamabad and also shared with Kenyan authorities including the Independent Police Oversight Authority (IPOA), Inspector General of Police (IGP-Kenya) and director of Public Prosecution Kenya.

Waheed and Omar Shahid Hamid are two senior investigators who visited Kenya for a week to investigate Sharif’s killing.

The assassinated journalist’s family have appealed for justice but expressed dissatisfaction over the Pakistani and Kenyan governments’ handling of the matter.

The investigative journalist’s killing in Kenya caused outrage in Pakistan. Kenya’s police, in an initial report, said the 50-year-old was shot dead in a moving vehicle in a case of mistaken identity, but later Kenyan police changed its version.

Sharif was a passenger in a Toyota Land Cruiser that came under attack as soon as it reached the Magadia-Kiserian Road junction.