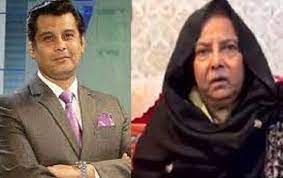 ISLAMABAD: The mother of Arshad Sharif approached the Islamabad High Court (IHC) on Friday, seeking a copy of the slain journalist’s post-mortem report.

In her petition, she contended that the body of her son arrived from Kenya on Oct 25 and on a request of the family its post-mortem examination was carried out on Oct 26.

It may be recalled that an autopsy on Arshad Sharif’s body had reportedly been performed in Kenya.

According to the petition, focal person of the family Colonel Usman visited Pims on Thursday to get the post-mortem report, but he was told that the report had been handed over to the police.

IHC asked not to make report public without consent

However, it added, the police denied having the post-mortem report and redirected Col Usman to Pims.

According to the plea, the “petitioner is desirous that the whole process should be transparent and that the representative of her should be directly involved and briefed regarding the daily progress and procedure which is being adopted by the respondents”.

The petitioner requested the court to issue a directive for the respondents to release the autopsy report. It further said that the report should not be made public without the family’s consent.

Her counsel also filed an application seeking hearing of the petition on Friday.

However, the court declined the request, observing that the matter was not of urgent nature.