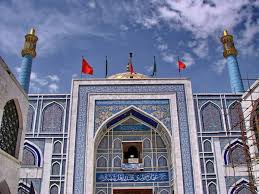 HYDERABAD: Despite very hot weather conditions, more than one million devotees from across the country are expected to attend the 761th annual Urs of Hazrat Lal Shahbaz Qalandar commencing on June 28 at Sehwan Sharif.

This was stated by Jamshoro Deputy Commissioner Sajid Jamal Abro who is also chairman of the Mela Committee of Hazrat Lal Shahbaz Qalandar.

Keeping in view the weather conditions and additional traffic flow on the single-carriage Indus Highway, a state of emergency had been declared in the Sehwan taluka and Dadu civil hospitals to meet any eventuality during the fair (Mela).

Speaking at a press conference here on Tuesday, the DC said that over one million devotees were expected to attend the Urs celebrations when the temperature was expected to rise up to 40 degrees Celsius and above. He said the administration had made foolproof arrangements to cope with the situation successfully.

A security plan had been prepared under which the whole Sehwan Sharif had been divided into six zones, he said, adding that 3,500 police personnel and police officers would be deployed, along with installation of closed-circuit television cameras and other gadgets to monitor the situation and maintain the law and order.

According to him, the management of the Hyderabad Electric Supply Company had been asked to exempt Sehwan from power loadshedding and also make standby generators available to meet any eventuality during any technical fault.

He said Section 144 of the criminal procedure code had been imposed and heavy vehicular traffic on the Indus Highway, swimming in adjacent canals in Sehwan Sharif and display of arms and ammunition in the fair had been banned.