Appointment of Arshad as PTVC chairman: IHC issues notices to secretaries, other respondents 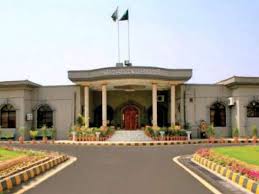 The Islamabad High Court (IHC) on Monday issued notices to secretaries of Information Ministry and Cabinet Division and other respondents in a petition challenging the appointment of Arshad Khan as chairman Pakistan Television Corporation (PTVC). A single bench of IHC comprising Justice Mohsin Akhtar Kayani heard the petition moved by Perviz Akhtar Bhatti, Secretary General PTV Employees and Workers Union, and deferred the proceedings after directing the respondents to submit their replies within two weeks.

The petitioner moved the court through his counsel Ali Nawaz Kharral and cited the federation through secretary Cabinet Division, secretary information, Chairman PTV Board of Directors, Arshad Khan and chairman Securities and Exchange Commission of Pakistan (SECP) as respondents. He adopted in his petition that Arshad Khan was illegally and unlawfully appointed as chairman of PTVC.

Bhatti contended that the Supreme Court held in its judgement that though the federal government was empowered under section 183 (b) of the Companies Ordinance 1984 regarding the appointment of a director to the board of PTVC, it had to do so by following the procedure prescribed in Clause (iii) of SI No 141 of the ESTA Code and the process additionally required transparency, merit and fairness in the appointment of public functionaries.

He argued that the Supreme Court has directed time and again to fill public sector posts strictly in accordance with the law and keeping in view the eligibility based on an objective criterion. He maintained that appointment of Arshad Khan is in utter and gross violation of PLD 2012 SC 132 (Tauqir Sadiq’s case) and 2013 SCMR 1159 (Ashraf Tiwana’s case).

Therefore, in his petition, he prayed to the court to declare the appointment of Arshad Khan as chairman PTVC as illegal, unlawful and based on extraneous considerations. He requested the court to declare his appointment in violation and negation of the provisions and requirements postulated by the Companies Act 2017 and the Rules of 2013 and the judgement passed by this court dated 7-5-2019. The petitioner also requested the court to direct the respondents to commence the process of appointment of director(s) of BoD of PTV including the chairman thereof in accordance with the law i.e. Public Sector Companies (Corporate Governance) Rules, 2013.