KARACHI: The Sindh Committee of the All Pakistan Newspapers Society at its meeting held on December 14, 2015, has strongly condemned the inordinate delay by the Sindh Information to clear the long outstanding dues as well as dues relating to 2015 despite clear assurances by the Sindh government and the APNS notice to the Adviser to the Chief Minister on Information.

The members expressed their dismay over the non-payment of dues of the member publications based in the Sindh province for the period from the year 2010 to December 2014 and the dues for the current year.

The issue related to the dues of member publications amounting to Rs53 crores whereas the requests to Chief Minister, Adviser to the Chief Minister and the Secretary of Information remained unattended resulting in accumulation of dues over Rs63 crores which included bills amounting to Rs10 crores for the current year. Due to the non-payment of the staggering amount, the financial survival of the APNS members has been irretrievably compromised and continues to be threatened.

The Sindh Committee has decided that all the advertisements of Sindh government will be suspended with effect from December 15, 2015, and, therefore, no ad in the issues of December 16, 2015 will be published.

The committee warned all the accredited advertising agencies that during suspension, no advertisements of Sindh government be released to the APNS and or non-APNS publications else, accreditation will be terminated.

The committee also decided that if any non-APNS publication published the advertisements of Sindh government, it would stand debarred from the membership of the APNS. The Sindh Committee reiterated its demands that to check the corruption in release of advertisements, data of advertisements should be posted on the website of the Sindh Information. 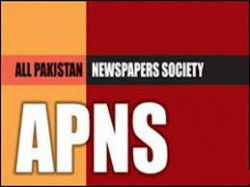