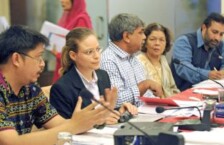 He was speaking at a conference titled “The Convention against Torture and Pakistan: Towards Implementation and Accountability” organized by Human Rights Commission of Pakistan (HRCP).

Israrud Din and ten others have been facing a case of sedition for declaring the Anti Terrorism Act (ATA) a ‘Black Law’ and holding a protest against the conviction of Baba Jan.

Implementation of UN convention against torture sought Baba Jan is an activist who mobilised local communities to demand compensation after their displacement by the natural formation of Attabad Lake in 2010.

The protests turned violent on August 11, 2011 in Aliabad, when the police used violent means to disperse the protesters leading to the arrest of Baba Jan and four others.

Mohammad Farooq, International Human Rights Observer coordinator in Gilgit Baltistan, who is also nominated in the FIR of sedition said that police had been misusing ATA and had been registering cases against dissenters.

Mr Farooq told Dawn that they had only held a protest after Baba Jan’s conviction.

”Every citizen has a right to protest and criticise legislation that violates his basic human rights. But police registered an FIR of sedition under section 124-A which was another violation of the law because a case of sedition can only be filed in the court rather than through an FIR,” he said.

“In the FIR dated 18th October 2014 (available with Dawn) it is mentioned that protesters blocked the road and criticised the ATA in their speeches. It also says that they announced a campaign against ATA and committed a crime by calling the ATA a black law,” he said.

Mr Farooq said that although a case was registered, police refused to provide a copy of the FIR, which was the basic right of the protesters.

Other participants were of the view that United Nations Convention against Torture, which Pakistan signed in 2010, should be implemented in letter and spirit.

Senate Standing Committee on Human Rights Chairman Afrasiab Khattak while speaking on the occasion said the number of cases of violence being reported in the country show that violence is spreading in the society.

“The senate committee will play its role in implementation of the UN convention against torture and eliminating violence in the society,” he said.

The two day consultation resulted in a number of recommendations being made. Participants recommended that the government should discuss the draft bill against torture and put the already established National Human Rights Institution in operation.

The government should train law enforcement agencies and judiciary and provide them access to modern and scientific investigation methods so that inhuman methods of investigation and extraction of confession can be given up. Rehabilitation centers for torture victims should be established. Civil society should be included in the state reporting procedure. Intelligence service should be under democratic control.

They said that an independent body should be established that investigates and prosecutes police officers accused of torture.

Specific recommendations were made for the parliament.

It was recommended that in accordance with the Convention, torture should be declared a crime. Participants demanded a drafting of a bill on the right to be free from torture that includes a clear definition on torture, in compliance with the convention against torture.

Participants demanded that the parliament should also enact a witness protection act.

Participants recommended that civil society and media build a broad of an anti-torture coalition with a collective strategy to campaign for the implementation of the Convention against torture.

Both media and civil society should take steps to improve awareness of torture in schools and society at large.

Media was called upon to report on cases of torture including torture inflicted on women and children and incidents in remote areas.

They recommended that three working groups targeted towards providing information to the government, to the United Nations and to the civil society should be established.

Also members of the bar should be educated and an effective legal aid system at the bar council should be established. Consultations with police authorities on the prohibition of torture should also be held.

Dawn that Pakistan ratified the UN Convention in 2010 and after that it was mandatory to submit a report regarding performance against torture within one year but government has not filed the report yet.

“In the consultation the World Organization against Torture in collaboration with people from all over the country and different segments of the society participated and gave suggestions. Recommendations have been made after taking suggestions” he said.