An evening of lilting classical music 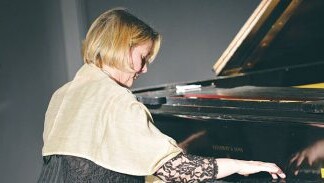 KARACHI: It does not happen very often that classical music sounds both contemporary and vintage at the same time without losing out on its classical richness. French pianist Martine Mirabel-Pitte played some lilting classical compositions at a concert on Thursday evening at the Alliance Francaise, creating an ambience where a variety of moods and emotions were communicated through heartwarming musical notes.

Ms Pitte entered the hall and played a short prelude piece. After that she addressed the audience and said she would be playing compositions belonging to the mid-19th and early 20th centuries’ composers because in the 20th century a ‘new style’ of music was being introduced which bridged the classical and the modern rather seamlessly.

She formally started the concert with three pieces by French composer Gabriel Faure. The first bit had a watery, cascading flow to it, whereas the second was more dramatic and intense. The audience got a fair idea of the pianist’s craft as soon as she ran her fingers on the piano to play the requisite scale. The increase in tempo in the dramatic piece was delightful. The third Gabriel Faure tune had a difficult progression but the pianist managed to do justice to it.

Next up were a few not-so-long impressionistic pieces by Debussy. The tonal variations in Debussy’s compositions could be readily felt as the first bit had a sweet, amorous touch to it while the second was more fluid having romantic urgency. The third piece was marked by playfulness of the scale which Ms Pitte was able to depict through her passionate playing.

Debussy was followed by Johannes Brahms’ innovative compositions. Ms Pitte took the concert to another plane with a controlled, measured performance because the scales demanded an up-and-down movement with strong theatrical elements. It sounded as if a story was being told through pure music and the audience could picture it as well.

Ms Pitte rounded off the concert with a Bach piece meant for the violin which the great musician had composed after the death of his first wife. The piece was transcribed by an Italian composer Ferruccio Busoni and made it for the piano. Ms Pitte played the tune with great facility and was particularly noteworthy in bringing out the innate bathos in the composition. It was an emotionally demanding melody and required both skill and artistry. The pianist did that with consummate ease and her recital touched the heart, especially in the climactic movement. When she ended the performance, the audience greeted Ms Pitte with a generous round of applause.