Amnesty International calls for restoration of internet in Gwadar 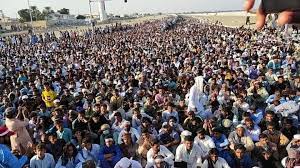 Amnesty International South Asia on Tuesday decried the reported internet shutdown in the port city of Gwadar which came after an emergency law was reportedly imposed as protests arose over illegal fishing.

“Such disruptions are neither necessary nor proportionate, and inhibits the ability of the people of Gwadar to communicate, access information, seek safety and work,” the organisation stated in a series of tweets.

Amnesty International further said that the imposition of section 144 in “the name of public security should not become a pretext for more human rights violations – especially if they prevent people from peacefully protesting”.

It expressed concern that both the reported internet ban and emergency law would serve as a springboard for further crackdown on people’s “fundamental freedoms, including freedom of expression, peaceful assembly, right to personal security and freedom from arbitrary detention”.

The organisation called upon authorities in Balochistan to “immediately restore internet services and lift the ban on public gatherings”.

The statement comes shortly after days of protests and clashes, normalcy returned to the port city of Gwadar on Monday, as the port restarted operations, shopkeepers reopened their shops in the main bazaar and the authorities restored mobile phone service.

The Gwadar Rights Movement (GRM) activists have been protesting against the provincial government for more than two months over illegal fishing in the sea and unnecessary check posts. As a result, baton-wielding policemen had been deployed in various parts of the city to maintain order.

A high-level meeting, chaired by Balochistan Chief Secretary Aziz Uqaili expressed satisfaction over the return of normalcy to the port city. The Gwadar deputy commissioner and other high-ups briefed the meeting about the law and order situation through a video link.

So far, 14 GRM activists, including a local journalist Obaidullah, were detained under the Maintenance of Public Order. The Balochistan Union of Journalists (BUJ) strongly condemned the arrest of the journalist and demanded his immediate release.