Alone in a crowd

KARACHI: They say your face is the mirror of your soul. But this may be just a smart-sounding phrase. Faces can deceive as well. And that’s what attracts artists to faces: the broad space between revelation and concealment. They find it exciting to explore this space by investigating what’s behind the faces. That is exactly what a very talented painter, Zahid Mahmood Mayo, has done with his artworks which are on display at the Indus Valley School Gallery.

There are over a dozen exhibits on view and all of them are about people, alone or in a crowd. The noteworthy feature of these artworks is that there is a thread running through them. It hints at, nay speaks of, one aspect that can be detected from all the faces that the artist has painted: loneliness. Even when they are with other men and women, the loneliness is unmistakable.

It is evident from the very first self-axiomatic exhibit called ‘Aloof’ (oil on canvas). Still, ‘Aloof’ may be textually too obvious for the observation, which is why ‘Night Crowd West’ (oil on canvas) makes the artist’s vision less bleary. The public is not what he wants the viewer to look at but the faces that constitute groups — readily identifiable countenances.

Zahid Mahmood’s finest piece comes in the form of ‘Bann Ke Rehna Si’ (oil on canvas), where he creates a story-within-a-story like scene and tells a whole tale in one aesthetically rich and contextually potent frame. He uses the theatre as a metaphor and puts a scantily dressed girl as a prototype of a certain kind of people. The clever thing that he does is that he doesn’t make the girl take centre stage, and yet at the same time the viewer knows that she doesn’t exist on the periphery; she is right there, in the thick of things.

With ‘London’ the artist shows the diversity of his talent, turning a landscape into a character. Subsequently, he brings the show to a microcosmic level with pieces like ‘Islam Pura’ and ‘Siyah Posh’ (oil on canvas), where he focuses on individual faces and brings out the collective dilemma contained within them — the dilemma of something gone amiss, or will go amiss. 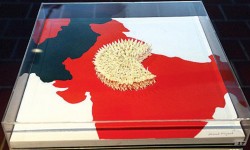