KARACHI: While expressing grave concern over devastating effects of federal and provincial governments’ media policies on member publications of the All Pakistan Newspapers Society, especially the smaller and regional publications, the APNS has warned the authorities that if the policies are not reviewed in consultation with the stakeholders, many publications will have to close down their operations, resulting in large-scale unemployment of journalists and media workers.

The APNS executive committee, at a meeting chaired by its president Hameed Haroon, considered the state of print media in the country and noted that the press information department (PID) and Punjab and Khyber Pakhtunkhwa information departments under the new policy had been empowered to select the media for government advertising, thus depriving the clients of their rights to choose the respective media for ads. Subsequently, the sponsoring departments had curtailed advertising, believing their advertising was being given to mostly unknown newspapers.

The executive committee members complained that in the distribution of advertisements, genuine publications were being ignored, which was evident from the ad that the Ministry of Information released on March 7, as it was issued to 143 APNS members and 112 non-APNS mostly non-existing publications, according to a press release issued by APNS Executive Director Dr Tanvir A. Tahir.

The APNS panel also took notice of the negative impact of the slow payment process of government ads on the newspapers due to the new policy that resulted in acute liquidity crisis for member publications and needed to be addressed by the federal and provincial governments on a priority basis. If the situation did not change, the committee said, the APNS would suspend the sponsoring clients who had not made payments against their advertisements and then in the second stage would consider suspending the entire government advertising.

The executive body meeting, in another resolution, noted that the DGPR of Punjab had curtailed the quantum of ads and stopped payments as a consequence of the new policy, particularly, the payment against SPL ads had completely stopped. The members urged the Punjab government to restore the pre-policy mechanism of payment without further delay.

Meanwhile, the annual report for the last two years as well as audit report for the years 2019-20 were adopted at the meeting. The executive committee also decided to hold its general council meeting on March 24 in Karachi. 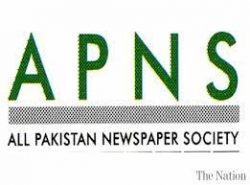