KARACHI: A stage play titled Aladdin put up by students of the Garage School at the Arts Council Karachi on Friday night wowed theatre lovers with its slick production value, intelligent bilingual script and heart-warming performances.

The moment the curtains went up, the nice Middle Eastern backdrop and a group of singers (choir) gave the audience an idea that what they were about to see was something special (bearing in mind the age group of the schoolchildren). The two narrators then appeared in front of the audience and told them about the main feature of Arabian Nights: the story of Prince Shahryar who, after knowing that his wife has been unfaithful to him, decides to marry a woman every night and kill her. In comes Scheherazade, who decides to confront the prince by getting married to him and every night tells him an intriguing story which keeps his interest intact. Aladdin’s story is one of them.

The narration leads to the play Aladdin. It is about the ruler of a city, Sultan, who can’t find a suitable suitor for his daughter Jasmine [Ayesha Irshad (English) and Kainat Shahbaz (Urdu)]. In a simultaneous track, the vizier of Sultan, Jafar (Danish Akram) is looking for a lamp hidden in a cave. Jafar comes across a street urchin Aladdin (Junaid Saleem) and forces him to get into the cave. He does go there and succeeds in finding the lamp. Once he rubs it, a genie (Shazil Khan) comes out of it and says to him that he can grant him three wishes. From then on the play moves at a steady pace, having twists and turns, including the romance between Aladdin and Jasmine, and then Jafar’s evil designs to get hold of the lamp to become all powerful.

The play was a success on many levels. A lot of credit for that goes to its director and writer Zarafshan Husain. The script is light and meaningful, and the direction is astute. A lot of hard work has gone into costume design and stage backdrop, which adds the kind of colour and vibrancy that’s required for such a job. Live music too plays a big part in creating the right ambience, beautifully complemented by the group of singers who did justice to the compositions.

That said, it’s the young, and in some cases tiny, actors who are the real heroes of the play. From Abdul Rehman (who plays Iago the parrot) to Shazil Khan (Genie) and from the kid who acted as the carpet (Shahnawaz) to the little cute dancers, all of them were a delight to watch. No wonder the audience appreciated their work with generous rounds of applause.

Aladdin will also be staged on Saturday.

The play is the first fundraising event with an objective to purchase a building for the school in Shah Rasool Colony to accommodate the growing number of students seeking admissions.

Before the play Shabina Mustafa, founder of the Garage School, welcomed the guests and thanked the sponsors for their support. 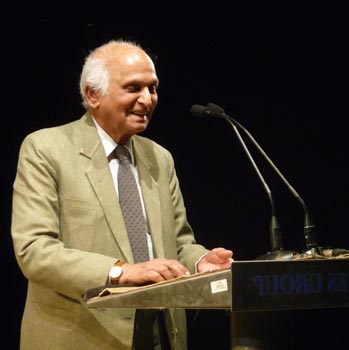