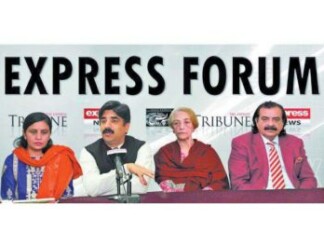 LAHORE: Panelists at the Express Forum said the agriculture sector should be declared an industry, in accordance with Section 5 of the Factories Act 1934. They added that the Minimum Wages Ordinance 1969 should also be extended to the sector.

Adviser to Chief Minister on Agriculture Sardar Abdul Haye Dasti, women’s activist Begum Mehnaz Rafi, human rights activist Mumtaz Mughal and Abdullah Malik were the panelists. The session was moderated by Ahsan Kamray. The panelist highlighted the condition of the agriculture sector in Pakistan and said 75% of the population was linked to it. Dasti said the government was working hard to uplift the agriculture sector as it would help achieve the target of 10 million jobs.

“We are combining education, research and awareness under one umbrella so that we can make good policies,” he said. “The last government spent billions of rupees on various projects, but the result was zero.”

He said the Pakistan Tehreek-e-Insaf’s (PTI) government was launching projects that would benefit the agriculture sector. “Urea prices have been reduced. Duties on the import of machinery have also been waived which will benefit farmers.” “Women play a major role in agriculture production, sowing, weeding, livestock rearing and running cottage industries as well as in post-harvest operations such as threshing, winnowing, drying, grinding, husking and storage,” he highlighted.

“To enhance the capacity for policymaking on relevant regulatory and legal issues, such as land tenure, water governance, food safety, seed certification, adaptation of international standards and agreements into the national systems, strengthening food safety and quality control and management system, there is a dire need to collect sex and gender disaggregated data to address the gender disparity faced by agrarian women workers in Punjab.”

She said the social protection of women working in agriculture activities could be ensured through their registration with Punjab Social Protection Authority and they should gradually be covered under PESSI and EOBI.

Speaking on the occasion, Mumtaz Mughal said Minimum Wages (for unskilled workers) Ordinance, 1969 should be extended to the agriculture sector through a notification by the government. “Collective bargaining is an important means to improve wages, working conditions, safety and health of agricultural workers,” she said.

Speaking on the occasion, Abdullah Malik said a mass awareness campaign should be conducted on laws for women empowerment and their implementation through helplines or women’s police help desks.