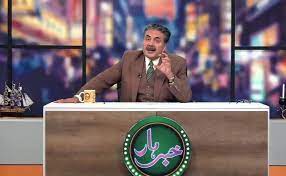 ISLAMABAD – Pakistan’s famous televangelist and journalist Aftab Iqbal’s show has been taken off the air days after performers mimicked a top official of a state institution.

Without specifying an exact reason for the ban, Aftab Iqbal — a known critic of the Sharif-led government — took to Twitter on Friday to announce that his show has been taken off-air.

Lamenting the government’s authoritative move, the TV pundit called PEMRA an instrument of a fascist imported govt that cannot tolerate any justifiable criticism.

“Is this really democracy or worse than Mussolini’s fascist Italy?” He asked while hinting at pursuing legal action against the ban.

On the other hand, PEMRA did not share any reason for its action against the comedy show, which has been aired in prime time and has a viewership in millions.

After Aftab’s announcement, several journalists, politicians, and activists called on the government to review the action citing freedom of expression.

Human rights activists and global organisations have long criticised the state’s censorship and control of the country’s mainstream and digital media.