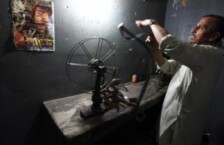 ISLAMABAD: India-based singer and musician Adnan Sami Khan is yet to meet procedural requirements for the renunciation of his Pakistan nationality, sources told Dawn on Tuesday.

“Pakistan’s High Commission in New Delhi has just sent us Adnan Sami’s Pakistani passport but not the documents that are needed to start the process,” an official said.

He said India was the second country after Germany from where most of the applications for the renunciation of citizenship were received every year.

“I wonder why they assumed that in this particular case, sending a passport without the relevant documents would be sufficient,” he remarked.

He said under the Pakistan Citizenship Act 1951, a form which is available at the Pakistan missions abroad, had to be filled out.

On its receipt at the directorate general of immigration and passport, the clearance from relevant departments is sought and the renunciation certificate is prepared and sent to the applicant.

Pak High Commission in Delhi yet to forward all paperwork related to singer’s new nationality
“We have sent a communique to Pakistan’s High Commission in New Delhi and also informed the Interior Ministry about the matter,” an official in the Directorate General Immigration and Passports added.

When contacted, an official in the Interior Ministry said action as per the law would be taken on the application if it fulfilled the requirements.

It is for the second time that Adnan Sami has applied for an Indian nationality since the beginning of this year. His earlier plea, made over two years ago, was rejected by the Indian government. Adnan Sami has been living in India on a business and professional visa for many years.

Under Pakistan’s law, any citizen of Pakistan residing outside the country, who is not a minor and is also a citizen or national of the host country or has been given citizenship or nationality by that country, shall make a declaration of renunciation of citizenship on form “X” in triplicate to the Directorate General Immigration.

However, every such minor child of that person residing in Pakistan shall continue to be the citizen of Pakistan.

The form “X” can be obtained from Pakistani consulates or missions abroad. This form is also available at the Directorate General of Immigration and Passports, Islamabad.

It normally takes around three months for a person, after submitting a complete application, to get the renunciation certificate.

However, incomplete applications and lack of necessary documents may lead to a delay.