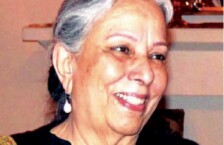 LAHORE: Siddiqa Begum, the chief editor of the oldest Urdu literary journal of the country Adab-i-Latif, passed away after a protracted illness here on Sunday.

Funeral prayers for the deceased were offered at Green Acres Housing Scheme on the Raiwind Road and she was laid rest in the graveyard of the neighbourhood. Qul for the deceased will be held at her residence 39-Green Acres Scheme. She is survived by two daughters and a son.

Daughter of Chaudhry Barkat Ali, who founded Adab-i-Latif back in 1935, Siddiqa Begum took control of the journal in 1981 when poet Nasir Zaidi relinquished the post of its editor.

She co-edited it for a couple of years with known literary figures like Kishwar Naheed and then Masood Ashar.

In the first edition of the journal under her in January 1981, she had Kishwar Naheed, Mustansar Hussain Tarar and Ghalib Ahmed as honourary editors.

That edition of Adab-i-Latif featured Intizar Husain, Khalida Husain, Jilani Kamran, Iftikhar Arif, Sarmad Sehbai and Ayub Khawar. She was then known as Siddiqa Javed Tariq due to her husband. They later separated and in 1984 she started appearing as Siddiqa Begum.

Since 1981, she continued as editor and later chief editor of the journal, making hectic efforts for survival of the monthly when most of the literary journals kept closing down one after another.

Not optimistic about the future of literary journals, she would regret that people were losing interest in reading literary material.

“Only people from older generations do (read) that. Even the writers themselves don’t read anything except their own published pieces in a journal,” she deplored in an interview with Dawn published in 2014.

“There are many financial issues and it’s becoming unaffordable to publish (such) journals,” she said.

Nostalgic about old Lahore, once a thriving literary and cultural city where she was born and brought up, Siddiqa Begum would say that old Lahore had been eaten away by commercialisation and materialism. “It’s no more now”.

Admitting the victory of technology on literature and culture, she said it was natural that old Lahore could not survive the onslaught of technology. But, she would plead that “there are nations which understand the value of heritage and literature and preserve their culture,” hoping against hope that someone from the public or private sector would sense importance of the issue and do the needful to preserve the centuries old culture of the ‘City of Gardens and Colleges’.