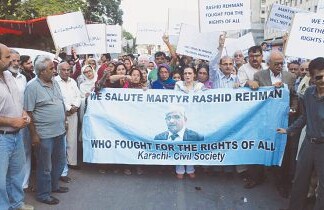 KARACHI: A fairly large number of people belonging to various rights groups, professional organisations and political parties gathered outside the Karachi Press Club on Sunday and held a demonstration against the assassination of Rashid Rehman, a lawyers and human rights activist, who was recently killed in an ambush in Multan.

“We salute martyr Rashid Rehman,” said a large banner with the slain lawyer’s picture displayed by the protesters, “…who fought for the rights of all”.

The demonstration was organised by the Karachi Civil Society — an amalgamation of various groups fighting for the rights of the marginalised communities and human rights organisations.

“We stand together for the rights of all,” said a placard. “Rashid Rehman was the voice of the oppressed,” said another.

“His killing is extremely condemnable perpetrated by those who don’t want to see justice to be served to the most suppressed members of society,” Zohra Yusuf, chief of the independent Human Rights Commission of Pakistan, told the gathering.

She said that no religion permitted to take anyone’s life as a protester held high a placard, “abuse of religion is not acceptable”.

Other speakers expressed their concern over the killing of enlightened elements of the society. “Such killings show the elements behind the murder of Rashid Rehman do not want to give a fair trial to the blasphemy accused, which cannot be accepted,” said a speaker.

They said that Rashid Rehman had been assassinated because of his relentless struggle to provide justice to the marginalised sections of society or individuals who had unjustly been cast away by the influential quarters of the society.

“It is time not to sit idle and save one’s own skin,” said another. “We all have to stand against the enforced disappearances in Sindh and Balochistan and should not allow a line that divides Pakistan between a tolerant society and a crowd of intolerant groups and individuals.”

The speakers said late Rehman’s murder was a question mark on the capability of the government that failed to provide him security despite being told of threats he had received to his life.

They said that extremists had given a message by killing Rehman that those who differed with their views would receive a similar treatment.

They said that intolerance and religious extremism were on their peak in the country and demanded the government devise an effective plan against those elements. They also demanded immediate arrest of the late lawyer’s killers.

Earlier, the organisers had to wait for half an hour till another demonstration in support of Pakistan army was over on the other side of the same street.