Absolute no to any talks over Pakistan Media Development Authority bill: Pakistan Federal Union of Journalists 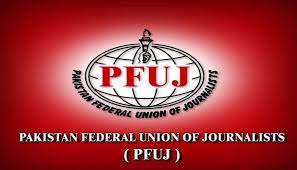 LAHORE: Pakistan Federal Union of Journalists (PFUJ) has dispelled the impression that the stakeholders are ready to hold talks over the controversial Pakistan Media Development Authority (PMDA) bill.

In a statement issued here on Thursday, PFUJ President Shahzada Zulfiqar and Secretary General Nasir Zaidi said the journalists’ fraternity considered the PMDA bill a draconian piece of legislation and rejected it in its entirety.

The two leaders said, “The government is trying to give an impression through press releases and statements that the stakeholders are ready to negotiate over the PMDA bill but we want to make it very clear that there cannot be any talks over the PMDA bill or even making another umbrella body or Authority under any other name.

“The entire Action Committee including PFUJ representative had made it very clear to the information minister that we will not accept any umbrella body like the PMDA and we will only sit with the government to strengthen the existing laws.

“The press release issued after the meeting is also very clear and it says the stakeholders told the minister that the PMDA is also unacceptable. The press release is also clear that we are ready to ‘further improve’ the existing laws.”

The PFUJ representative had even earlier told the Senate Standing Committee in the presence of Pakistan Broadcasters Association (PBA), Council of Pakistan Newspapers Editors (CPNE), All Pakistan Newspapers Society (APNS), Association of Electronic Media Editors and News Directors (AMEND) and other stakeholders that even if other stakeholders agree to government’s bill, the PFUJ will alone fight it against it as we had fought such draconian laws during the martial law periods with the help of the civil society and the people of Pakistan, said the statement.

“PFUJ considers the controversial bill for the creation of an authoritarian body against the Constitution and the spirit of democratic traditions,” the statement said, adding: “This proposed bill is meant to stifle the media and would turn out to be a disaster for media freedom in the country.” The two leaders made it clear that the PFUJ was not opposed to reforms in various laws.

“We are ready for reforms in Newspapers Employees Condition of Service Act 1973, formation of further establishment of ITNE benches in provincial capitals, wage award for electronic media employees. Reforms could also be made to the ITNE hearing grievances of media persons and others. The journalists fraternity is ready to talk about the working of PEMRA and open to reforms that may be offered to improve the working of the regulatory authority but as far as the PMDA bill is concerned, it is a closed chapter for the PFUJ.

“It has already been rejected by stakeholders so there cannot be any talks over it,” the statement said. The two leaders accused the government of holding talks with fake journalist bodies. “There are some fake bodies that are serving the interest of the establishment and they have no respect among the ranks and files of media workers. The government is consulting with such fake organisations and wants us to share platforms with such organisations. We want to make it very clear that we will not share any platform with such journalists unions that are doing the bidding for the establishment to gain some petty interests, ignoring the catastrophic consequences of this draconian piece of legislation.”