A Nobel for journalists 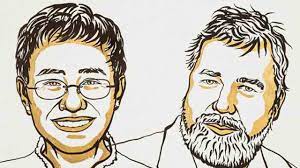 With democracy under threat across the globe from various quarters, it is refreshing that the Nobel Prize Committee felt obliged to award its coveted peace Prize for 2021 to two reporters. Maria Ressa and Dmitry Muratov from the Philippines and Russia respectively are ‘representatives of all journalists’ as the Norwegian Nobel Committee put it. This award has come as a token of appreciation for all journalists who risk their lives while reporting in extremely unfavorable circumstances. Democracy and freedom of the press are facing increasingly adverse conditions, even in this time and age when many had started thinking the times of suppressing expression were over. Muratov is the co-founder of Russia’s Novaya Gazeta (New Gazette) and Ressa is the CEO of the Philippines news site Rappler. This selection by the committee is of immense significance as it will serve to draw global attention to the imminent and relentless threats that various strongmen pose to the freedom of expression in their respective countries.

As attacks on journalists in many countries, including Pakistan, have demonstrated lately it is important to send a clear message to those who want to strangle the media, that without free expression no country can have a strong democracy. Rulers all over the world, including Pakistan, must realise that there is an emergency for activists and journalists. The world needs independent media that can call out those that transgress their constitutional and legal boundaries. The world needs to make a show of solidarity with all those conscientious journalists who challenge draconian laws and resist authoritarianism under whatever disguise it may come. This show of support is vital for the survival of free media and a free society based on principles of democracy. Totalitarianism is on the rise and the forces of darkness are threatening fundamental rights such as the freedom of expression.

Intolerance is increasing in societies around the globe and in this situation journalists like Ressa and Muratov are beacons of courage and hope for journalists everywhere. As attacks on journalists are becoming more brazen across the world – from dismemberment to abductions, firings, and even murders of journalists – an irrational hatred against journalists is mounting. Disdain for the press does not lead to a better society. Today’s threats to free expression we must all counter with unison. Insidious and thuggish censors are a venom for societies, and their antidote is effective networks of free press both nationally and internationally. Protection of free speech should be a priority right now, and any negligence in this matter will be lethal for the intellectual and political growth of our future generations.