KARACHI: University of Karachi’s history department took the city on a walk through historical events one may not be familiar with as it opened a three-day exhibition at its art gallery where models of architectural wonders, replicas of world-famous paintings, sketches and maps were exhibited on Tuesday.

Students from second, third and fourth years put up their work for display in different rooms with final year students presenting historical events from ancient to modern time. A final year student, Mashal Madani, explained that scientists believed humans have evolved from a chimpanzee.

To negate this theory, the students displayed a replica a 2.8 million-year-old fossil found for the first time in human history of the Taung Child in South Africa in 1924. “This is just the skull of a three-and-a-half-year-old boy,” she said, adding that the skull was somehow similar to that of a chimpanzee, but was certainly a human skull.

Scientists, she said, suggested that the child was killed by an eagle or similar large predatory bird as it had claw marks on the eye sockets. “It was certainly not a dinosaur that had killed him,” she said, laughing off people’s misconception that a big bird could refer to a dinosaur.

The second discovery, she narrated, was that of Lucy, who was also replicated by the students. Several hundred pieces of bone fossils representing 40% of the skeleton of a female were discovered in Ethiopia in 1974. Madani said the mummy was bipedal, which means that it used two legs to walk. The amazing part, she said, was that it had a femur bone, which exists in humans not monkeys.

Next on display was a painting of Francisco de Vitoria, a Roman Catholic philosopher, theologian and jurist of Renaissance Spain. Madani said with amusement that people lacking historical knowledge often mistook Vitoria as a woman. “He was best remembered for his defence of the rights of the Indians of the New World against Spanish colonists and for his ideas of limitations of just war,” she said, explaining that by just war he meant how war could be fought without bloodshed.

There also was a sculpture of Niccolo di Bernardo dei Machiavelli, who was an Italian Renaissance political philosopher, statesman and a senior official in the Florentine Republic. He died in 1527 and wrote his most well-known work, ‘The Prince (II Principe)’, in 1513, which brought him a reputation as an atheist and an immoral cynic.

Machiavelli described immoral behaviour, such as dishonesty and the killing of innocents, as being normal and effective in politics for survival.

A third year student, Ayesha, explained how they had potrayed the history of British India through wall chronology. In the chronology, she explained the process of ‘satti’, a ritual performed in Indian Rajput state where a widow immolated herself on her husband’s pyre or takes her own life in another fshion shortly after her husband’s death. When Warren Hastings was made governor-general, she said, he ended this ritual.

The centre of attraction in the room was a model of the Chittor Fort – one of the largest forts in India – made by third year students. The fort is a United Nations Education, Scientific and Cultural Organization World Heritage Site.

One of the students, Maria Javed, explained that their focus was on the fort’s structure, which no ruler could conquer until Alauddin Khilji attacked it twice and managed to get inside the fort.

The fort, she said, had six gates which needed to be taken over to reach the main gate. When asked if Khilji attacked the fort because of emperor Rattan Singh’s wife Padmavat, Javed smiled and responded that Khilji was just on a war spree and it had nothing to do with Padmavat. However, the fort, she said is a place where Padmavat immolated herself in a mass suicidal attempt.

The exhibition is being supervised by an assistant professor of the history department, Dr Farah Deeba Khan, who expressed the belief, “History is not just about numbers, dates and events. It is about civilisations, wars, people and much more.”

The exhibition continues till tomorrow evening. 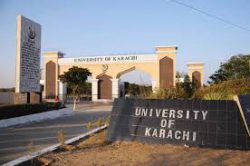