A journalist’s ordeal: Kept captive for 18 days in Lyari, using COVID-19 as an excuse 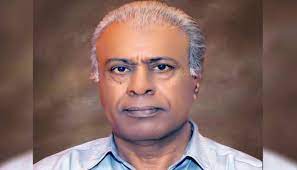 Earlier this month, Nadir Shah Adil, 76, was visited by some unknown people at his home in Karachi. The veteran journalist was told he needs to be taken to a hospital in Karachi’s Lyari area for treatment of coronavirus. What happened next was confusing and petrifying for the journalist.

“I was kept in a room without any medical treatment,” Nadir Shah Adil, also known as Shah jee, told me “I have little doubt in my mind that I was a hostage. I was definitely not a patient.”

Adil was kept, against his will, for 18 days by unknown people. During this time, he was not allowed to leave the hospital premises.

At times, recalled Adil, the men would take him to see a dance or music performance in the courtyard of the hospital. During this, they would ask him “strange” political questions about Lyari.

“Each time, I told them that I only recognized football players as I myself played the game for years,” the journalist recalled, “After 18 days of immense mental torture I was finally freed after a word of caution, Shah jee takleef ke mazarat magar kuch khayal kiya karo [apologies for the pain, but be careful]”.

There are many unanswered questions around Adil’s abduction, which need to be immediately investigated by the Sindh government.

First and foremost, I wonder who could be behind this and why? Was it a Lyari gang? Have they returned despite such tight security in the area?

Nowadays, even a literary program can’t be held in Lyari without informing the Rangers.

There have been reports lately that some elements of the Lyari gang have come back from Iran and resettled in the area. The Iranian Baluch factor has in the past caused serious concern, particularly after Indian spy Kulbhushan Sudhir Jadhav’s network was unearthed in Karachi. Adil has in the past been targeted by the gang as well.

It is a sad reminder that Lyari was once known for its thriving political activities.

It produced the most dedicated workers, as well as football and boxing players. The area has also been the residence of many well-known journalists like the late Siddiq Baluch, Latif Baluch, Nadir Shah Adil and many young journalists, photographers now active in the field like Saeed Sarbazi, Arif Baluch.

Lyari, once dominated by the Baluch, was a hotbed for political activists struggling against martial law. However, after 9/11 it became a hotbed for militants. The new crucible of terror included al-Qaeda, Tehreek-e-Taliban Pakistan and other outfits including Indian spy Jadhav’s network.

During the worst ethnic conflicts in Karachi, the area was never shut down. Even when the Muttahida Qaumi Movement (MQM) held strikes, Lyari remained open as the resident of the area never had a conflict with the Urdu-speaking people.

But all that changed when former home minister Dr Zulfiqar Mirza launched an operation against MQM’s militants. Instead of using the police to round them up, Mirza sent the Lyari gang’s king, Uzair Baluch, after the MQM men.

This was perhaps the biggest disservice the Pakistan People’s Party (PPP) leadership could have done for the constituency, which always voted for the party.

It is primarily why in 2018, Lyari sent a strong message to the PPP, when Chairman Bilawal Bhutto Zardari was defeated by an ex-PPP worker and Pakistan Tehreek-e-Insaf’s Shakoor Shad.

After talking to Shah jee a few times, I did not find any contradiction in his statement. But still out of curiosity I asked him why neither his family lodged a complaint nor approached the media when he went missing.

“What would have happened to them [my family] had they even tried?” Adil said, “My sons were warned to not speak to the media or the police.”

While we can only demand an inquiry into what happened to Adil, justice seems to be a faraway dream in Karachi, particularly in such cases, where there is a strong nexus between criminals, police and politics. In some cases, even the lower level of judiciary and prison officials are involved.

Interestingly, Shah jee, who was a football player before he became a journalist, was asked by his abductors about his political affiliation and whom he thought could win the next election. “I said, ‘Have you brought me for medical treatment or for interrogation?” the journalist replied.

What he narrated next was completely unbelievable, especially for those who don’t know Karachi, its politics, police and criminal activities.

In the city, hospitals, clinics, ambulances and even doctors and nurses have in the past been used to cover up a crime. From fake death certificates to police surgeon reports, anything can be available as per the requirement of a case.

“Almost every night they took me in the same hospital vicinity,” Adil said, “They never took me out of the hospital where I sometimes saw young boys and girls singing, dancing and drinking.”

The captivity continued for 18 days, when finally one day a tall man told him he is going home. He then hailed a rickshaw and send Adil home, adding, “We will not disturb you from now on.”

When asked about Lyari’s deterioration, Shah jee explained that the area loved and voted for the Bhuttos because Zulfikar Ali Bhutto created opportunities for the youth to go abroad. He set up a sports department to assist young sportsmen in the area.

But then gang wars began as the secular Lyari turned towards sectarianism and extremism. In fact, Shah jee added, the very term “Lyari gang war” was coined and promoted by four police stations and their police officials.

I wonder if there is any saving Lyari and its future generations.