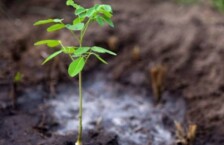 Plant for Pakistan Day was observed throughout Faisalabad division with new zeal and passion and more than 30 thousands plants were planted by govt departments and private institution in one day.

The theme of “Plant for Pakistan Day” was “One person – two Tree” and officers of divisional/district administrations and other departments planted two tree in this regard, one tree for Pakistan and one tree was dedicated for Kashmir Solidarity. Divisional Commissioner Mehmud Javed Bhatti inaugurated the Tree for Pakistan Day by planting two trees at Gutwala Forest Park. Later, he also planted plants at Municipal Corporation Complex, Park of PHA at Samundri road and Agriculture University.

Expressing his views, Divisional Commissioner Mehmud Javed Bhatti highlighted the significance and importance of trees and said that new passion had been emerged in the nation for planting trees so as Prime Minister Imran Khan announced the 10 billion Tsunami programme to achieve the glorious objectives of Green Pakistan. He said that now the every citizen of Pakistan was following tree plantation campaign by realising its importance. He emphasised upon increasing the wealth of forest to provide pollution free environment to the coming generation. He urged upon the proper and regular care of the plants and said that trees should be looked after like the children for its nourishment so that real objective of tree plantation could be achieved.

He informed that officers of all departments in Faisalabad division had been directed for planting the plants at the available sites and post planting care must be done. He said that regular monitoring of the trees planted during the campaign would be made by the divisional administration and performance in this regard could be highlighted in the annual evaluation report of the officers.

VC Agri University Professor Dr Muhammad Ashraf informed that the tree plantation campaign was properly implemented at all the sub campuses as well and Agri University was actively taking part in the Green Pakistan campaign which would be made a success. DFO Wajeeh ud Din informed that the target has been set to plant the 0.8 million trees in Faisalabad division by December 2019. He said that Forest department had taken elaborated measures for planting maximum trees and a number of saplings were being provided to the citizens during this campaign.

DG PHA Asif Ch said that big trees were being planted at the public parks, green belts and other available sites in the city. He hoped that Faisalabad would be made green by planting maximum trees.

CO Municipal Corporation Sardar Naseer said that the special attention was being given on providing civic facilities to the citizens besides taking part in the tree plantation campaign.

Meanwhile, 700 plants were planted by the officers of Faisalabad Development Authority at FDA City in connection with the Tree for Pakistan Day. DG FDA Amir Aziz, ADG Mian Jameel, Director Ch Sarwar and other officers were present on the occasion. DG FDA Amir Aziz informed that 10,000 plants would be planted during the monsoon tree plantation campaign.

He expressed his commitment that FDA would play its role to make the Green Pakistan Campaign a success. In connection with the Tree for Pakistan Day, Deputy Commissioner Sardar Saifullah Dogar and other officers of district administration planted plants at DC Complex.