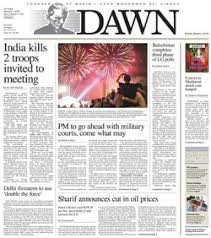 EDITORIAL: An official spokesman of the Central Government has … made a vicious attack on this newspaper and its Editor. It would demean these columns to take serious notice of the foul-mouthed invective used on the personal plane…. However, the vague unspecified allegations about the policy of this newspaper… require refutation. …

The present policy of this newspaper is perfectly clear; it gives support to those Government policies which, in our opinion, merit support and serve the national interest, and criticizes those actions or policies which, in our opinion … can do harm to the country. … [I]t is absolutely untrue that this newspaper … has “assailed the honor and integrity of the Armed Forces of Pakistan”. … We … agree that the Government has a duty to safeguard the integrity of the country and the honor of the Armed Forces; and … believe that this can best be done by ensuring that the democratic rights of the people … are fully safeguarded, and that the Armed Forces are permitted to perform their primary role of being fully prepared to defend the country’s borders … and any other duties assigned to them by the democratically elected civilian authorities.

We also emphatically refute the meaningless charge that DAWN and its associated newspapers have … “tried to stir up new labor unrest in Karachi”. We certainly do support the workers’ just demands, but have never tried to instigate trouble or unrest. … With regard to the threat of action … [it] has all happened before; and in the name of some surrealistic concept of Press freedom, the Press has been smothered….